There is a scene in Blackfish, a documentary about the effects of captivity on killer whales, that will stay with you long after the credits have stopped rolling. In it Kenneth Peters, a trainer at Sea World San Diego jumps into one of the marine park’s huge tanks to perform the finale of one of the day’s Shamu shows with Kasatka, a twenty-something female killer whale. As soon as Peters jumps into the water, the killer whale grabs the trainer by the foot and drags him down to the bottom of the deep tank. Luckily, the narrator of Blackfish notes, not only does Peters have experience with animals, he is also an accomplished diver. When the killer whale brings the trainer back to the surface, Peters doesn’t scream or panic or flail about. He simply pats the killer whale as if to say, “It’s okay” and he starts breathing very methodically in an effort to pack his lungs with more air in the likely event that he would be dragged down again. Sure enough, a few moments later Kasatka takes him back down to the bottom of the tank and holds him there for what seems like an eternity. The whale finally pulls Peters back up and the trainer shows the same forethought that he did before, even though the situation is becoming more dire. Over the course of the next few minutes the killer whale continues her routine of burying and resurfacing. She eventually lets the trainer go only to grab his other foot and continue the dangerous cycle. Toward the end of the clip, the trainer’s expression becomes more and more desperate; the audience can tell simply by looking at his face that Peters knows he is going to die. Thankfully after almost fifteen minutes, Peters was able to escape with the help of a momentary lapse of focus on the whale’s part, a large net, and his incredibly fast swimming (given the little air and two broken feet he was working with). The most incredible part of this story, aside from the fact that Peters survived, is the forethought and sense of calm the trainer had throughout the entire incident. That of course got me thinking about triathlon… (Thankfully training and racing are nowhere near as dangerous as Peters’ ordeal.)

During a race we all have those little moments of panic when we wonder if we paced ourselves correctly. Did I go too hard on the first part of the bike? Did I burn too many matches on that hill? What if I get off the bike and I can’t run? I hope my legs can carry me through the back half of this marathon. In triathlon the opportunities for over-pacing, impatience, and self-doubt are endless. With a background in endurance sports I think I’ve always known this, but my last two triathlons made this fact abundantly clear. This year SavageMan 70.0, undoubtedly one of the most difficult triathlons around, was held on September 15th, one week after the Ironman 70.3 World Championship in Las Vegas. I decided to do both. The uncertainty leading up to my second long distance triathlon in eight days was unlike anything I had experienced before. Several days after Worlds, my body was still feeling the effects of the race. Luckily toward the end of the week my bike and run legs had returned just in time to drive to Deep Creek Lake, Maryland for SavageMan. I knew that if I wanted to do well, I had to follow my pace and nutrition plans to the letter. During a race when things are moving so fast I find it easy to get wrapped up in what’s going on around me. My swim was so slow, maybe I’ll push it a little harder on the bike. I can’t let her pass me… I hate these road conditions. Getting caught in the moment like that could cause me to sacrifice the latter stages of the race because I’ve let panic, lack of focus and self-doubt seduce me away from my plan. “Bike for show; run for dough.” “Bike how you should, not how you could.” These sayings are everywhere but the truth in them is undeniable. Without forethought and proper pacing early on, an entire race could be sacrificed. During SavageMan I had a lot (and I mean a lot) of time to think about this on the bike. Cyclists who were having faster, better, more powerful days than me rode past, one after another (after another). I wanted to follow, but pursuing them at their pace wasn’t an option. I had to hold back, race within myself and trust in my training. Like Peters who relied on his experience with diving and animals to stay composed, endurance athletes must rely on their pace and nutrition plans to execute their races correctly. A little focus and forethought go a long (long) way.

There’s only one finish line and it’s at the finish. Happy training! 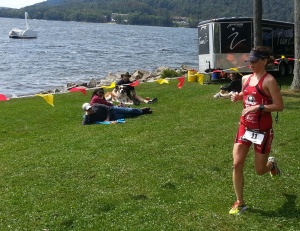 Finishing the run at SavageMan 70.0.  First female pro and fastest run split of the day.