Confession: I struggle with writing race reports. I’m hyper-aware of how quickly a listener’s eyes glaze over when I recount the minute details of my race day. Are all of the stories interesting to me? Of course! Does that mean people want to hear them? Not quite. My family members and close fiends humor me and tolerate my tales for a good ten minutes. After that I might as well be reading from the phone book. So with that in mind I give you an abbreviated race report for Ironman Panama 70.3, the Latin American Pro Championship. Here it is: the good, the bad, and the ugly (in reverse order, just to keep you interested).

The Ugly
* Traffic: Traffic in Panama is horrendous (and I’ve experienced my fair share of D.C. and NYC congestion). I’ve never seen anything like it. There is a dearth of street lights that confounds and I had a couple of taxi drivers that can only be described as aggressively passive aggressive.

* Lost Bike: The airline I took from D.C. to Panama lost my bike. There’s nothing quite like arriving in a foreign country for the first time and going through customs only to realize a crucial piece of equipment hasn’t made the journey with you.

* Sunburn: “Panama is hot” is an understatement. The forecast predicted a high of 96 and a low in the 70s every day that we were there. Let’s just say I was less than vigilant about applying sunscreen in transition and I paid for it dearly. 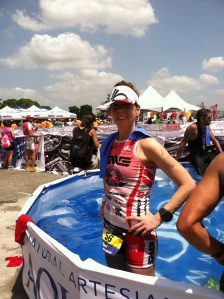 The Bad
* One aid station on the bike: The Panama 70.3 bike course was new this year and it featured four 14 mile long loops. Sounds fun, right? Well it got a little congested but more pressingly there was only one aid station that you passed three times with bottles of water that were skinny and fell out of standard bottle cages – making it impossible to get all of the water you needed without risking a penalty for littering along the course. Dehydrated? No bueno.

* Windy: The bike and run courses had several stretches that should have come with a high wind warning. Along one road the wind was funneled between the buildings so perfectly it almost knocked me off my bike as I crossed an intersection. I went to tuck my salt tabs back into my bento box and my baggie acted like the perfect little sail. Ouch. Hold onto your hats, boys and girls!

* The run to T1: Doesn’t the run to T1 always seem impossibly long? There’s the joke swirling around race morning: “It shouldn’t be called a 70.3. It should be called a 70.8!” – all thanks to the run between the swim exit and your sweet ride. In this department Panama 70.3 did not disappoint; the run took forever. Want to know what I learned on that painfully long trek? Running in bare feet can bruise the bottom of your foot. Running a half marathon on a bruised foot? Not good.

Water, water all around, but not a drop to drink.

The Good
* The Steed: Living in Virginia I don’t have much choice but to do a lot of my rides on the trainer during the winter. Riding my bike in Panama was my very first experience with the Argon 18 E-118 on the road and it was FANTASTIC! The geometry of the bike, the handlebars, the aerobars, and the bike fit (courtesy of V02 Multisport) all came together to give me the MOST comfortable ride. I couldn’t be happier!

* The Throne: Coming into this season I was a bit nervous about switching saddles but when I tried the Cobb Cycling Plus something just “clicked”. Riding on the road in Panama and getting aero seemed to make the saddle even more comfortable. I know that it might sound crazy and I can’t explain it, but sitting on the saddle felt like the stars aligning.

* The Wheels: “I wanted to fly, so I bought a bicycle” could easily read: “… so I bought ENVE Composite 8.9s”. When I went for an easy spin prior to race day to check out the run course I felt like I was zooming past my surroundings. I was the only constant in a world full of blur. Want wings? Try ENVE.

* The Power: Up until now I’ve gotten my power numbers from a power tap in the hub of my rear wheels. As you can imagine this creates quite a headache when racing. I wouldn’t have power numbers unless I chose to ride one specific rear wheel every race. It was awesome to race with my new Rotor power meter – so easy, so accurate, and so helpful with race day pacing.